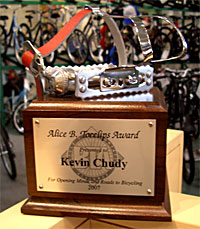 Since 1980, the nonprofit Bicycle Transportation Alliance has been the voice for urban cyclists in Oregon and beyond. The BTA’s tireless efforts have resulted in TriMet bus bike racks, helped implement Bicycle Boulevards in Portland and they continue to provide government entities with information from a cyclist’s perspective.

Bike n Hike has always supported the BTA in efforts such as procuring fleets of 24" Giant bicycles for the Safe Routes to School program.  Additionally, Bike n Hike offers cyclists who join the BTA a member discount on parts and accessory purchases.

In 2007, the BTA presented Bike n Hike owner Kevin Chudy with an “Alice B. Toeclips” award for service to the cycling community through event sponsorship, direct assistance to the Safe Routes Program, and providing to cyclists through the Bike n Hike stores.

Join the BTA and help in continuing to make Oregon a great place for cyclists.